Senators is Almost Sold Out

By Melissa O’Neill, in Senators

What makes Senators in Lewes, Delaware so special?  What did the first homeowners,  “the pioneers”, see in this community that would make it the best place to live at the beach?

When we launched Senators in September 2012, we had hundreds of interested folks looking for a Schell community on the east side of Route 1, the Ocean side. Having lived in this area since 2006, I had no idea what a big deal this was. With a location nestled in the desirable Gills Neck Road area, which is known for its higher priced communities and recognized as “custom home territory”, and being the first community with Natural Gas, Senators became a huge draw for folks that were just coming out of the previous housing market struggles.

What was projected to be at least a 6-year project has nearly sold out in a little over 3 years.

Did I mention Senators was a cornfield on the day we launched? Not every buyer is comfortable buying under these conditions since they have to envision (with the help of illustrations) the look of a community, entranceway, and streetscapes among other things.  The day we opened up sales, our small team of 3 sold 27 homes and the model looked like the trading floor of the New York Stock exchange!

What was projected to be at least a 6-year project has nearly sold out in a little over 3 years. What was once a dusty cornfield in 2012 with no homesite signs has blossomed into one of the most sought after communities in the area.

How do things look like today? The community is bustling with activity! There are weekly homeowner happy hours at the clubhouse. We have a biking group, two walking groups, yoga classes, dinner groups and a book club. In addition, the residents work together to support local non-profits such as Delaware Guidance Services for Children and Youth.

It’s been amazing to watch how quickly friendships have formed here! You can just picture yourself bringing your favorite dish to the weekly happy hour. Or meeting other bikers at the community circle to ride along the Breakwater trail/Gordon’s Pond Loop. Or simply walking to the beach or downtown Lewes shops.

From cornfield to bustling community, Senators has quickly become one of the best selling communities at the beach. But with only a few homesites remaining you won’t want to miss your chance to be part of such a great community.

By Melissa O’Neill, in The Retreat at Love Creek 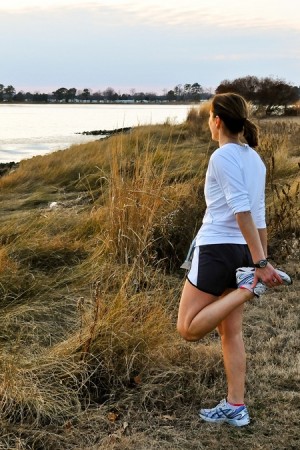 I’ve read about runners’ mantras in running magazines and have used them on occasion. A mantra is defined by Webster.com as “a mystical formula of invocation or incantation.” Really? Mystical?

As an almost-50-year-old rookie runner, these mantras have come in handy, helping me make it through tough workouts or remember my form and focus during a big race. I used words like “believe”, “trust” and “relax” to make it through two half marathons and my first full marathon recently. The word “believe” reminds me that I can do anything, but first need to believe that I can do it. “Trust” means I’ve completed countless hours of training, so I can trust that I’m prepared for the moment. “Trust” also means  I’ve asked God to carry me when I’m too tired. And “relax” is a reminder to relax my shoulders. Otherwise, my shoulders end up somewhere near my ears when I get anxious during a run. Not pretty.
I read about a guy whose running mantra is “relentless.” He actually yells it out loud during a race, instead of repeating it in his head. Not really my style, but this sport has changed me a bit so, who knows, maybe I’ll start yelling to the crowd soon. Reminds me of a dog with a bone that just won’t let go.
You don’t have to run to know the power of the words in your head. Imagine if you repeated the words “I can’t” or “I’m afraid” over and over. Not exactly the results I’m shooting for. This got me thinking… that word (RELENTLESS) means to never give up. Kinda like the company I work for. In the toughest market in history, we’ve not only grown, we’ve thrived. How did that happen? Unyielding perseverance. Success like this does not just happen. It has to start with a thought, a plan, and a RELENTLESS attitude.
You are what you eat. You are what you think. You can survive in spite of health issues, bad weather, and negative opinions. What do you choose to think about?  What do you choose to be?

The Best Things in Life are Worth Waiting For

By Melissa O’Neill, in The Villages at Herring Creek

Why are we here?  With a company like ours that already has 10+successful communities in the area, a few questions come to mind as we open The Villages at Herring Creek. How do we decide which communities we should sell homes in?   How do we decide which communities to enter?
I know I could ask the people who make those decisions but I think I know the answers.  It’s about much more than profitability.  There are certain locations that have a special “personality” that fits buyer type. For example, The Villages at Herring Creek is a beautiful wooded spot with ½ acre home sites (and some larger). The community includes existing estate homes built by a previous builder – and some of those custom homes are huge!  This community has similar appeal to the one I grew up in near northern Delaware. It has more of a rural country setting, and is away from the usual and likely locations, but once you get there – paradise. You’ll see beautiful water views, wooded lots, and deer quietly walking through the open home sites. This is a unique community, but still meets the “curb appeal” test so typical of a quality Schell Brothers community.
Sometimes the best decisions take a bit of time to think about. You know the old adage about “the best things in life are worth waiting for”?  That can apply to the person you marry, the car you drive and the home you buy. Think about the feeling you’d like to have when you arrive at your home.  If you’re looking for serene living and peaceful beauty, it’s worth the drive, and worth waiting for.

By Melissa O’Neill, in Heritage Creek

Heritage Creek offers comfortable gas heat and in January 2011 the savings are better than ever.  Buy before January 31st and take advantage of the Triple Play that includes a FREE Gourmet Kitchen, FREE Upgrade 2 Tile in the Kitchen, and a FREE Rinnai Tankless Water Heater.  Some guidelines apply – see salesperson for details.  Schell Brothers invites you to come home to Heritage Creek in 2011!
Visit Heritage Creek online